Brexit Update: The UK Border Operating Model for Trade with the EU

As announced by the UK government on June 12, the new UK border controls on the movement of goods between the EU and Great Britain (GB) will be gradually implemented in three stages between January 1 and July 1, 2021. Note that these three stages only apply to imports into GB (England, Scotland and Wales). Requirements for exports from GB are also covered by this guidance document but there will be no transitional phase-in. The movement of goods to and from Northern Ireland are not covered, as those will follow different rules set forth in the Northern Ireland Protocol in the Withdrawal Agreement between the EU and the UK. 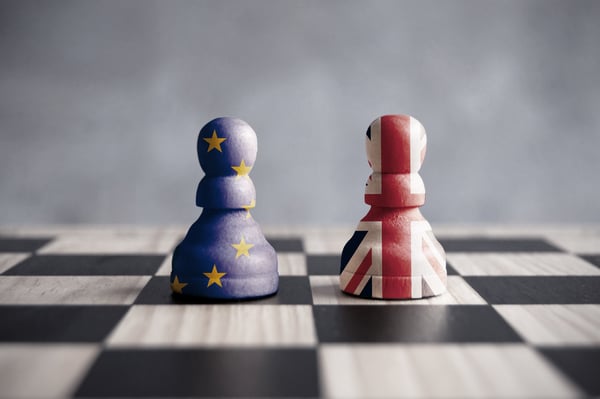 The same core processes will apply throughout all three stages:

UK importers will need to check whether or not their products are classified as “controlled goods.” HMRC included a list of controlled product categories in Annex C, page 205 of its UK Border Model document. Goods which are not on this list are referred to as standard goods.

Between January 1 and June 30, 2021, standard goods may be imported into the UK by using a deferred declarations process, which consists of 2 steps:

Some conditions apply to be able to use the deferred declarations process.

Importers not having their own CFSP authorization may use the CFSP and the DDA of their customs representative.

When leaving the EU, the haulier should be informed of the GB EORI number of the UK importer.

It will still be possible to use existing customs processes by submitting a standard full declaration (pre-lodged) or use the Simplified Declaration Procedure (CFSP), if so authorised.

Imports of controlled goods require a pre-lodge of a full import declaration in CHIEF. Alternatively, importers that have a CFSP authorisation can lodge a simplified frontier declaration (SFD), followed by a supplementary declaration on the fourth working day of the month following acceptance of the SFD. In addition, for live animals and high-risk animal by-products (ABP’s) not intended for human consumption a pre-notification into IPAFFS is required. This must be done latest 24 hours before arrival in GB. IPAFFS (Import of Products, Animals, Food and Feed System) is the UK’s equivalent of EU TRACES.

From January 1, 2021, traders will be able to move goods into the UK customs territory under the Common Transit Convention (CTC). Upon arrival in the UK, the lorry driver needs to carry and present the goods and the Transit Accompanying Document (TAD) at an office of transit. Transit movements are completed either at the UK customs office of destination or at the premises of an authorised consignee. If the transit shipment contains only standard goods, the deferred declarations procedure can be used until July 1, 2021.

HMRC will establish a new IT platform called Transit and Goods Vehicle Movement Service (GVMS) which will allow to link together the MRN of a TAD’s representing the different consignments on a lorry in one single Goods Movement Reference (GMR) to which must also be added the vehicle/trailer registration number. This must be done by the haulier already at the EU port of departure. The GVMS is linked to CHIEF. When the transit shipment arrives in the UK, GVMS will be updated and automatically send an arrival notification to the customs office of transit. This facility will not be available at all ports. HMRC shall communicate later which ports are connected to GVMS.

The obligation to lodge an ENS into CHIEF is waived until July 1, 2021.

From April 1, 2021, imports of products of animal origin (POAO) must be pre-notified using IPAFFS at least 24 hours before arrival in GB. These products must also be accompanied by a Health certificate which the EU exporter must obtain from its national authorities.

For all these products, full or simplified import declarations need to be pre-lodged.

Beginning July 1, 2021, both standard goods and controlled goods can be imported into GB using either the traditional temporary storage model, where goods coming into GB can be stored at the frontier for up to 90 days before being declared to customs, or the new pre-lodgement model, where goods arriving in GB will be required to have submitted a customs declaration in advance of boarding on the EU side. The pre-lodge model is set up especially for RoRo and/or as an alternative for ports that don’t have the space and infrastructure to operate temporary storage.

Which model applies will depend on in which location the goods are imported because each GB port operator will have to decide which model to implement. Ports that have both RoRo and deep-sea may accommodate both models, but then the import declaration needs to specify whether it concerns a RoRo destination or not. HMRC will communicate which GB ports will adopt the pre-lodgement model, however this may take time, since ports still need to make that decision.

This model requires that a UK import declaration is lodged before boarding the vessel (ferry) or shuttle train at the EU port of exit. This will be checked at departure in the EU and at arrival in GB. Goods will be refused EU exit/GB entry if they do not have proof of a pre-lodged declaration.

From July 1, 2021, the following controlled goods must enter GB through a port where an appropriate Border Control Post (BCP) is located: Products of animal origin, animal by-products and animals. This requires a pre-notification in IPAFFS at least 24 hours before presentation of the goods at the BCP. The BCP will perform documentary, identity and physical checks. Consignments must be accompanied by a Health Certificate issued by the competent authority of an EU Member State. High risk food and feed not of animal origin coming from outside the EU and imported in GB from the EU will also be subject to BCP and pre-notification requirements. Some high-risk plants and plant products must in addition have a phytosanitary certificate.

The GVMS will also support the pre-lodgement model as from July 1, 2021.

The process is the same as described in Stage 1 for movements of goods into the UK customs territory under the Common Transit Convention (CTC). When transit movements arrive at the UK port, the goods and the TAD must be presented to the customs office of transit unless TAD and vehicle/trailer data were entered into GVMS before departure from the EU. However, some GB ports may still choose to operate a paper-based office of transit. The transit movement ends either at a customs office of destination or at the trader’s premises if he’s an authorised consignee.

Dare to Dream Big: A Unified EU Customs by 2040